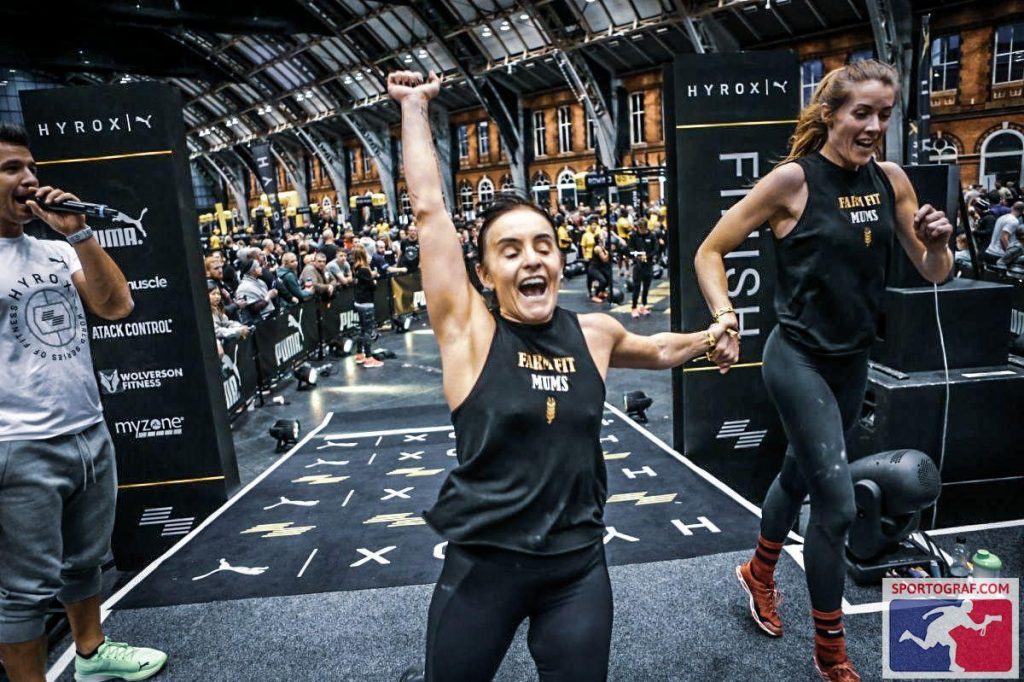 So of course, all signed up, our training began in mid-November where we would get together once a week for as close a run-through of the whole thing as possible. Cheered on by Lola the dog and Ruby my daughter! Clare’s training schedule as I’m sure you are all aware is pretty full, so adding in some capacity and our tactical pairs session pushed her on to another level, building confidence in her running. My intentions were to couple our pairs session with some running and some kitchen sandbag workouts.

With around 7 weeks of training, punctuated by Christmas, completed, all of a sudden the 29th of Jan was upon us. We set off the day before up to Manchester so that we had adequate time for ‘pre match’ carb loading.

The big day…our set off time was 3.40 pm so we spent the morning through lunchtime distracting ourselves from nerves in the city before arriving at the venue to get checked in and bags dropped. First impressions of Hyrox on arrival was overwhelming noise and chaos with all its stations, Rox zone and running track, but actually, it is an extremely slick and well-organised event which becomes apparent when you are in the thick of it.

Go time! Somehow, we naturally ran to time – with a relaxed warm-up, water intake, 100th loo stop! we filtered into the starting pen with around 10 other female pairs, ready to join the previous wave already trudging through the course. The atmosphere was dry and hot in the venue so we had decided to set off cautiously and up it where we could. From there 2 things stuck in our minds – it’s just one long chipper and heads strong keep going! So we picked off the workouts as planned – Clare would go straight into them off the runs and I would finish them off and head off back out to the track.

The burpee, run, row, run section felt like the summit of the mountain. Though no mountain descent is ever easy, we had confidence in ourselves at the farmers, lunges and wall balls thanks to our farm fitness conditioning! We just needed to keep the pace up on the runs in between, Clare was pushing me on at this stage but going into the runs with heavy legs hit me harder than expected so I had to steady her (which you’ll all agree is no mean feat!) in the last section to ensure I didn’t lose it completely and crash!

Overall we progressed through the course seamlessly, except for only 2 moments – where my foot got stuck in the rower and there was no sandbag ready to grab and go, so one was swiftly removed from the back of someone’s neck care of Sargent Shep! Thankfully neither impacted our time too much to stress about.

Finally! 75 wall balls, split into 15’s ticked off and we flailed our way over the finish line (which happened to be an inclined ramp – why!) to finish at 1 hour 10 mins 59 seconds. Amazed and relieved, it wasn’t until around 20 mins later that we realised we had secured 3rd spot an awesome achievement in itself but to have also qualified for the world championships in Las Vegas this year! Unreal!

So with plans in place to improve our time, you’ll see us with weighted vests running tired legs and practising getting out of those pesky foot straps on the rower. We are excited to see where we can push ourselves to.

As always, the Farm Fitness community has been unbelievable in its support and we honestly can’t thank you enough. Huge Thanks to Tom and the coaches for this amazing facility, environment and opportunity to take part in and achieve things that many of us never thought possible. 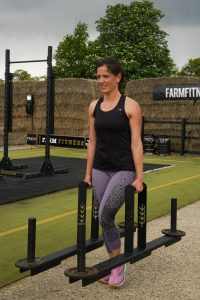 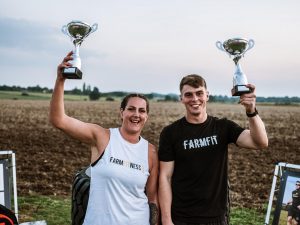